Menu
Log in
Register
Install the app
You are using an out of date browser. It may not display this or other websites correctly.
You should upgrade or use an alternative browser.

Posting this as a reference to confirm that a 2004 R1 front end is a direct swap for our FZ8/Fazer8’s.
I picked up a 2011 Fazer8 from a dealer who specializes in theft recovery/insurance write-offs. I had to repair some minor cosmetic damage, buy new mirrors and a windscreen, and the bike was good as new. I also happened to pick up (at the same time) a ratty looking R6 that turned out to have a 2004 R1 front end grafted on to it.
The R1 has fully adjustable forks, slightly bigger rotors (320 vs 310, I think), and radial brakes, so even if they are 7 years older than the original Fazer forks, they’re still a significant technological upgrade, in my view.
The swap was extremely easy, which is why I thought I’d post about it.
I kept the original triple trees, which have the identical side-to-side spacing as the R1, and just slipped the R1 fork tubes into the clamps. I kept the R1 wheel, which is identical to the Fazer/FZ8 as far as I can tell, along with the brakes. Geometry is unchanged from the original. The fender is actually the exact same part, so I used the Fazer one as it was in better shape.
Note: the R1 triple clamp width is the same as the FZ8, but the offset is different, so using the R1 triple might work, but rake and trail would be affected. 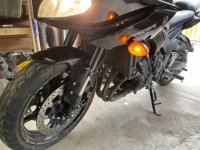 Friggin eh! Nice job on the find and a bonus front end upgrade. Did the 6 also have the R1 rear shock? (not sure if that is even capable) A previous owner had swapped out the one on the fazer I have now with one from a F1, no complaints whatsoever.
T

At least one with powerful brake
I am not sure the length of the fork is the same so even if it is ok to ride this way it may have some changes between both forks.

R1 forks are somewhat shorter than the FZ8/1. Check the free length compared to your stock forks.

Lowering the front end reduces the effective steering head angle approximately 1 degree for every inch. The FZ8/1 was designed for 25 degrees of head angle. The R1 for 24. Also, the R1 triple clamps are different in alignment to increase trail (distance of axle from the theoretical vertical center line.

Lowering the front end and decreasing head angle in the FZ8/1 increases turn-in (lean angle of the bike vs. turn radius). This makes for easier cornering, which I consider to be a handling improvement.

It also decreases stability at high speeds which can be aggravated by poor maintenance (bearings and fastener tightness), wheels (trueness), tires (uneven wear, imbalance) and crosswinds. It can result in an increasing oscillation (commonly known as a tank slapper) at speed in excess of 100mph.